On November 17, 2011 by Molepeople With 0 Comments - Uncategorized

by Dr. Irwin Belgrave, PhD, Director of Applied Climatology at the Center for the Advancement of Human Endeavors, Head of the Congressional Climate Research Study:

As per congressional order the following are expert recommendations based on current models of rising global temperatures should they result in a more catastrophic climate change event. They are only for the eyes of the Congressional Subcommittee on Climate Change and Future Corn Subsidies as well as the President and his science advisors.

With the polar ice caps due to completely disappear in the next decade and the continued advance of our country’s deserts, it is abundantly clear by now that (whether by man’s actions or through the natural process of climate cycles) we are entering a period of warmer temperatures the likes of which our planet’s not seen for thousands if not millions of years. Already island nations like the Maldives have literally been wiped off the map and our own coastal cities are threatened, continuing only through the superb efforts of the Army Corps of Engineers. This, however, is not the end: far from it. Conditions, if left unchanged, shall continue to deteriorate and our nation will face unimaginable disasters. These recommendations are meant to serve as a guide for all eventualities so that you, our elected officials, can deal with them swiftly and responsibly when the time comes.

Section A: An Inland Sea and the Rise of Giant Mosasaurs 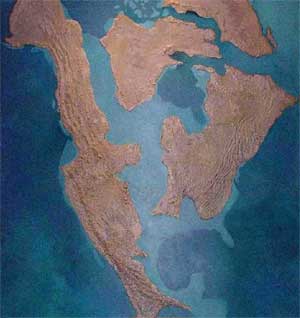 If we look at other points in our planet’s history when temperatures rose due to natural cycles and not manmade phenomena, as I have been instructed to point out by this committee, we may indeed find answers to the worst of what we may face. In case of planetary impact by extraterrestrial objects, such hindsight has enabled us to predict, though not prevent events like the Apophis disaster. Likewise, insight into our own history allowed us not so long ago to analyze the rise of youth protest movements and using the lessons learned from earlier nonviolent protests in the 1960s derive the best course of action. I believe you’ll agree that our course of simply ignoring them until they went away was rather successful. And so, with these examples in mind, I must regretfully inform you that the first and most likely scenario to befall our nation is the return of the North American Inland Sea.

For those of you who are unfamiliar with the Inland Sea, also called the Western Interior Seaway, our continent was once split in two by a body of water stretching from Canada to the Gulf of Mexico. This was during another period of warm temperatures and no polar ice caps: the Cretaceous Period, or time of Noah’s Flood as I have been instructed to include by Congressional mandate. Now with water levels rising it is possible that this waterway will once again reopen and the heartland of America will find itself submerged. To present this eventuality, I recommend through a coordinated effort with both Canada and Mexico, a series of flood walls and levies be built on the coastlines of the Northwest Territories, Manitoba, Ontario, Texas, Louisiana, Mississippi, Florida, Alabama, Georgia, parts of South Carolina, all of eastern Mexico, as well as the coastlines of Guerrero, Oaxaca, and Chiaras. Though still under review by the Congressional Budget Office, I estimate the entire project to cost no less than fifteen trillion dollars. As a cost-effective alternative, I recommend simply evacuating the affected states. As those most in danger are the sparsely populated desert and agrarian states, I don’t expect much loss of revenue.

Of course if we assume, and rightly I think we should, that the Inland Sea will return, we must also assume that it will bring with it some of its former denizens. While most could merely be dismissed as invasive species and fished with impunity, one possible, even probable would pose a potential danger to human life: the giant mosasaur. These marine reptiles were quite possibly the fiercest predators water has ever seen. Often referred to as the T-Rexes of the sea, they could grow up to fifty-six feet long and were known to eat anything they could catch including fish, early birds, sharks, and even smaller mosasaurs. Now some of you may be thinking that with these creatures extinct from the fossil record or as I’m congressionally mandated to include, jokes that God played on biologists, it is unlikely that they should reemerge alongside their habitat. To that, I would point out that the coelocanth was once believed to be extinct only to be caught off the coast of Africa. Also, there is the possibility if no specific individuals exist, that present day animals such as alligators or monitor lizards could evolve/be intelligently designed to fill the role of giant apex predator similar in design to a mosasaur. Not to mention the possibility of manipulation by misguided individuals with access to advanced scientific knowledge and equipment, which going forward I feel we should restrict to the most deserving and trustworthy individuals. In fact, I believe this scenario so likely that I am including it in this report as a clear and present danger to future American lives.

According to my expert analysis, I find there is only one possible way to prevent the rise of giant marine reptiles terrorizing our impending inland sea, and that is to reduce their potential food supply. Predators of that size will either require large amounts of prey species on which to feed or large prey species. Quantity or quality. As, with Kansas and Nebraska underwater, decreasing the quantity of fish would impact a now essential food supply, we should focus our attentions on the latter. To this end, I am calling for congress to lift the ban on whale and dolphin hunting. As the largest, and most probable food source for a fifty foot aquatic predator the continued existence of whales, specifically the sperm whale, serves as a clear and present danger to our future security, and as such must be eliminated. Believe me when I say that I regret this action, but my figures do not lie and this is the only way to prevent the future consumption of American sailors.

Now some of you may balk at these recommendations. You may call them alarmist or unfeasible, maybe even unnecessary. Some of you may even ascribe to much talked about theory of the “promising” young graduate student Wilford Daggereaux that melting polar ice caps may result in cooler global temperatures, possibly even a new Ice Age. Certainly such things are possible, however, we should focus most of our money and resources on what is likely, and this begins with evaluating the North American Inland Sea and exterminating all potential food sources of the giant mosasaur, most especially sperm whales.
========================
FROM THE EDITORS:
As always, we encourage you to learn more.  Check out the Intergovernmental Panel on Climate Change and the US Global Change Research Program.